Submit Your Projects At ANY TIME During The MCO Period​

It’s time to slow the roll! Can you create a track/ramp that allows a marble to roll as slowly as possible?

Click on the TITLE to expand for more details

The goal of this project is to build ramps for marbles using household materials and to investigate which materials and techniques can cause marble to move down the ramps as slow as possible.

With this project, children get a sense of how different forces work on an object. The trajectory and speed of the marble can be controlled by changing the amount of friction acting on the marble and the angle of the track which the marble travels on.

Gravity -the force that causes things to fall towards the earth.

This force can be seen acting on the marble when it is pulled by gravity to roll down the track you built when you release it from the top.

Friction – force that causes resistance of motion of an object moving over another object.

Angle – a measurable amount used to define an object’s distance from horizontal when it is rotated.

The angle of the track can affect the speed your marble travels. You might notice that when your ramp is placed in a position with a larger angle, meaning when it is steeper, your marble moves down quicker. However, when you place your track at a slight downward angle, your marble moves at a slower pace.

The heavier your marble (whichever object you choose to roll down the ramps of your marble run) the higher the momentum.

As your marble travels down the marble run, it is said to have kinetic energy.

Ask them what did they do to overcome those challenges? You can try to make a marble go around a loop. 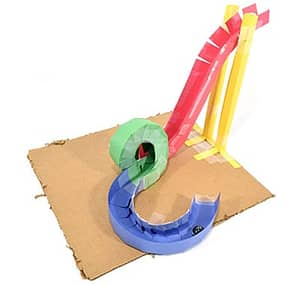 How To Win Challenge

Register your contact details below and once Movement Control Restriction is uplifted, we will notify you of our fun and educational programs.